A friend of mine has a Haas 4th axis / rotary table, which he wants to drive from a Matsuura CNC mill. Unfortunately, no matter parameters and options what we tried we were unable to talk to the HAAS controller over the RS-232 port.

This is a fairly common device, and so I figured I'd provide some information on repairing it.

I recently ran into an issue with a "Datum PRS-50 Cesium Beam Primary Reference Source" which I couldn't talk to using any of my USB to Serial converters - after some debugging I figured out that this was because all the USB->Serial devices I tried seem to only output 0V to +8-10V, while the spec calls for -5-25V to  +5-25V. This works for "modern" devices, but not for some older ones, and so needed to use a machine with a "real" serial port for the PRS-50 (as a side note, if anyone knows of a USB to RS-232 which actually does full voltages, please let me know!). I figured that this might be the same issue with the HAAS controller, and so tried with a desktop with a known good serial port, but this didn't help, and so I decided to dig a bit deeper.

Being made in 1995, this Haas controller is all through-hole DIP construction. 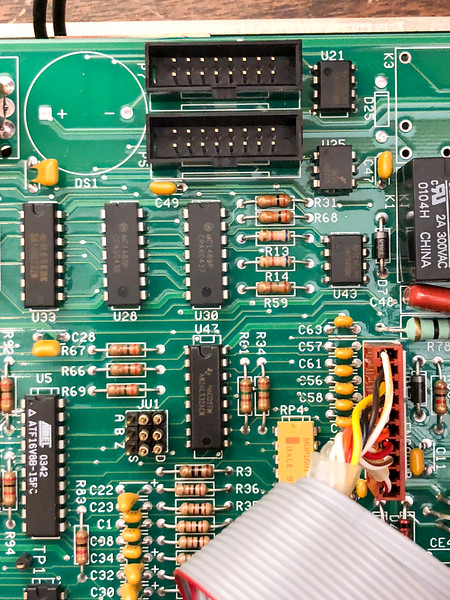 The controller has 2 serial ports, one Upstream (to the CNC machine / PC), and one Downstream (for daisy-chaining controllers). I opened it and first checked the connectivity from the serial port to all of the pins on the ribbon cable, and then to the rear of the board -- the IDF connector was slightly loose but seemed to make good enough connectivity. I then ran it on a workbench and hooked it up to an oscilloscope and traced the serial signal. The input goes through an MC1489P Quad Line EIA-232D Receivers, which then hands the signal off to an NEC PD71051 Serial Control Unit (which receives serial data streams and converts them into parallel data characters) which finally hands this to a Z80 series CPU. Return traffic (which only seems to come in response to "xP" commands) goes through the PD71051 and then an MC1488P Quad Line EIA-232D Driver

Tracing the serial signal showed that it wasn't arriving at the PD71051. The obvious culprit here is the MC1489, and so I desoldered this and the MC1488, installed sockets (so future replacements are easier) and installed new ones. 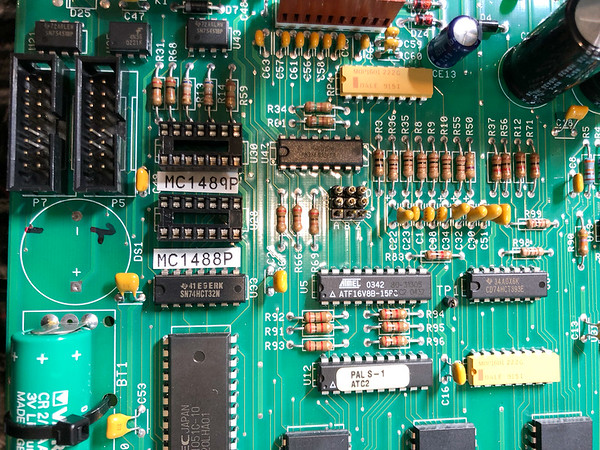 After testing this on the workbench and checking the signal with a scope I could now see the serial signal arriving at the MC1489P, but didn't bother hooking up a protocol analyzer to check the output - instead, I just sent an XP command, got back "01" as the response, buttoned it al up and tested it -- and now it works.