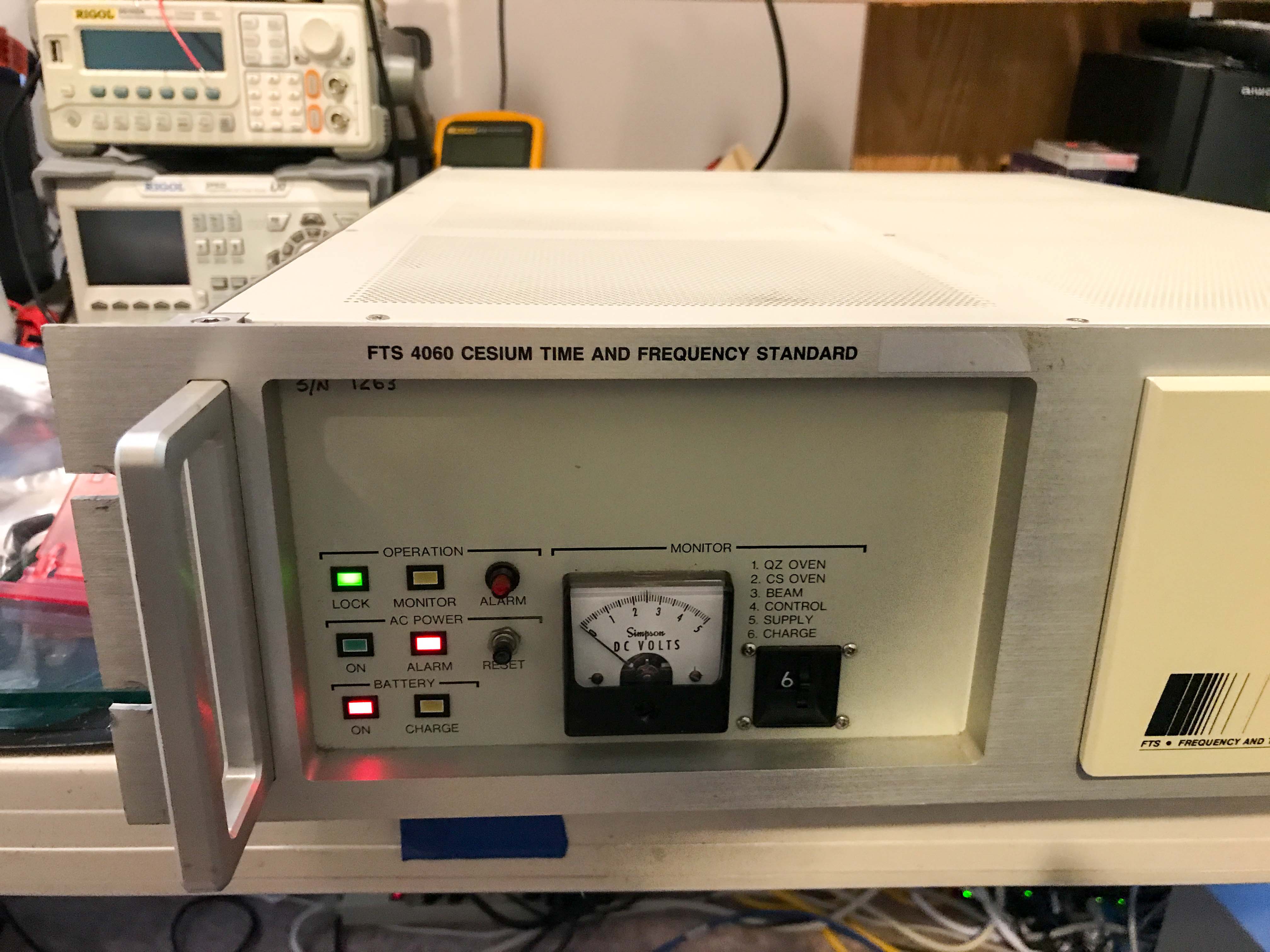 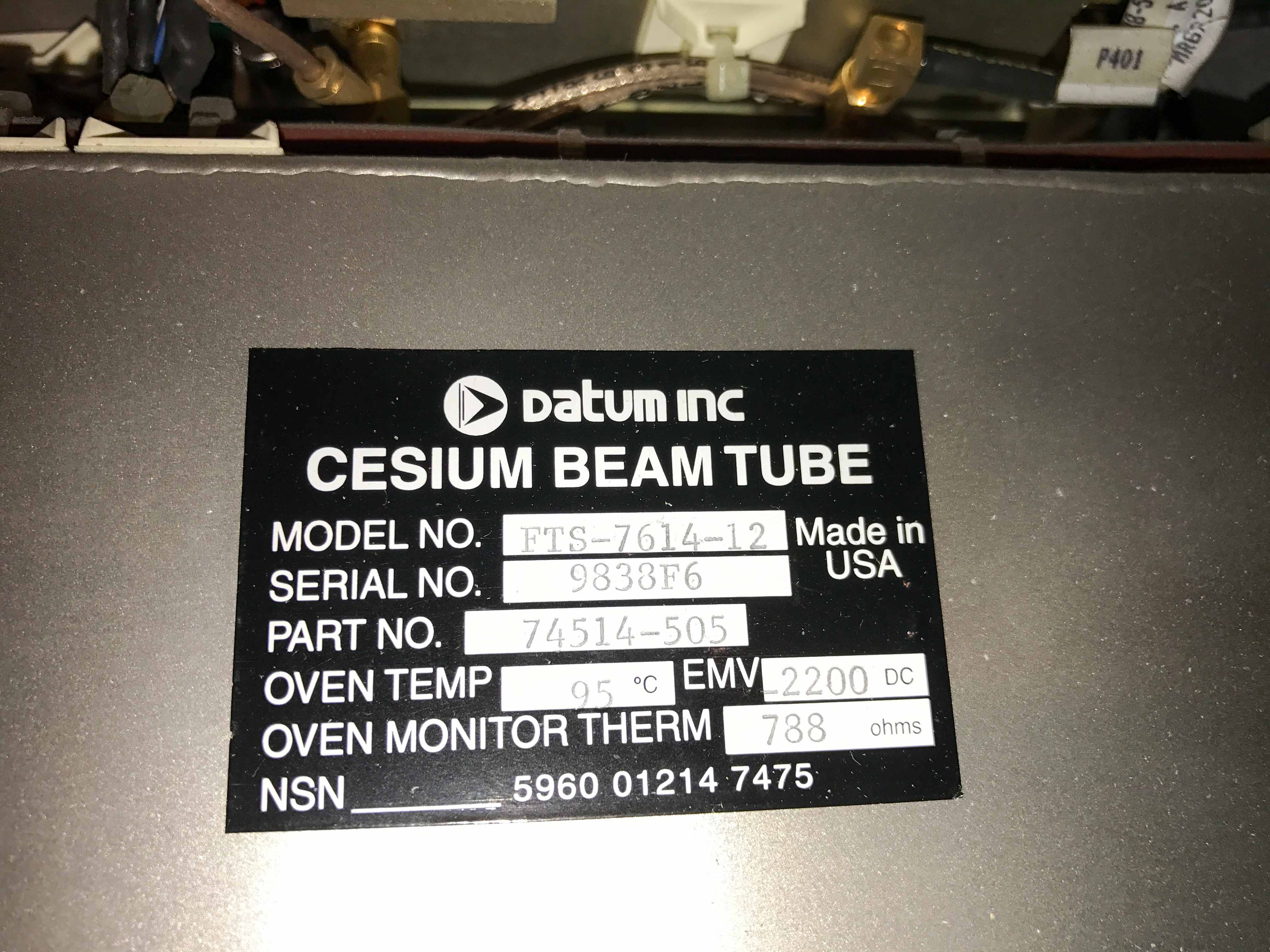 I recently decided that I wanted to have an accurate source of time at home, and so, obviously, I needed some cesium clocks, some rubidium oscillators and some GPS timing sources. This was for my home use, and I couldn't justify spending new prices, so I decided to get some used gear - this page/section has some info on refurbishing and upgrading timing devices.

I wanted to be able to supply devices with NTP time, and also to be able to improve the accuracy by adding an atomic clock. I also figured that I'd like to to be able to support IPv6, and so I ended up deciding on a Symmetricom SyncServer S250. This device has 3 Ethernet ports for NTP, 10Mhz input (so I can add higher stability sources) and outputs (to monitor the stability) and 1PPS in and out. They are also relatively cheap, going for ~$1,200 on eBay. I found one which had damaged rack ears, and the seller didn't know much about it for somewhat less. Unfortunately it didn't come with the Rubidium oscillator option (which I figured I could add later), nor the antenna.

The SyncServer gets its time from GPS satellites. These provide the perfect source for timing; GPS positioning relies on the receiver knowing the exact time, so the GPS satellites have very high accuracy clocks and are kept true.

When the GPS signal is locked, the S250 is accurate to nanoseconds, but if the GPS signal is lost (for example during a storm, if the GPS signal is turned off, if the satellites all die, etc) the device goes into "freewheeling" mode and needs to track time on its own. For this reason, the S250 comes with a built in temperature compensated crystal oscillator (TCXO) that keeps the server accurate to nanoseconds when the GPS is locked, but when the signal is lost, it drifts up to 21 milliseconds per day (or about 1 second in 47 days). The rubidium oscillator option improves this to 6 microseconds per day (or one second in 4.5 years). I figured "in for a penny, in for a pound", and so I decided that I wanted higher accuracy, and so needed a cesium primary refernce source - 3x10^-14, i.e. 0.00000000000002 Hz; this corresponds to a time measurement accuracy of 2 nanoseconds per day or one second in 1,400,000 years.

The rubidium oscillator option (which improves holdover accuracy is 3 to 25 microseconds) is an internal unit, which connects to the main board. The SyncServer datasheet helpfully shows that this is a Symmetricom X72, which connects to a connector on the main board. These were widely used in various test gear, and so I found one on eBay for ~$250.

I ended up reverse engineering the pinouts and made a custom interface board for it here. I'll post pictures of the final, completed one, and pinouts later.

Finding a good, cheap cesium oscillator was somewhat harder, but eventually, I found a Datum FTS 4060 Cesium Frequency Standard for sale at a nearby electronics surplus dealer. It powered up, but it wasn't clear it would achive lock (they take a long time, especially after being in storage). The same dealer also had some Datum PRS-50 Cesium Primary Reference Source units ("The Datum PRS-50 Cesium Beam Primary Reference Source is a primary frequency reference with fully automatic operation via microprocessor control. It provides a Stratum 1 quality signal without the need of any external reference.") - these are fairly common units and were used extensively in telecom central offices and cellular base stations. I ended up getting two of them.

This page is still a work in progress. I'll get hope to get around to publishing more details soon, until then there here are pictures here: http://photos.kumari.net/Projects/AtomicClocks

The FTS 4060 ended up having some issues, which I've fixed - some details on its repair can be found here. [TODO: add this!]

So far I've made one of the PRS-50's work, but haven't had a chance to look at the second - I think that it just needs a simple adjustment of the beam current, but simply haven't had time to deal with it. Some more details here. [TODO]